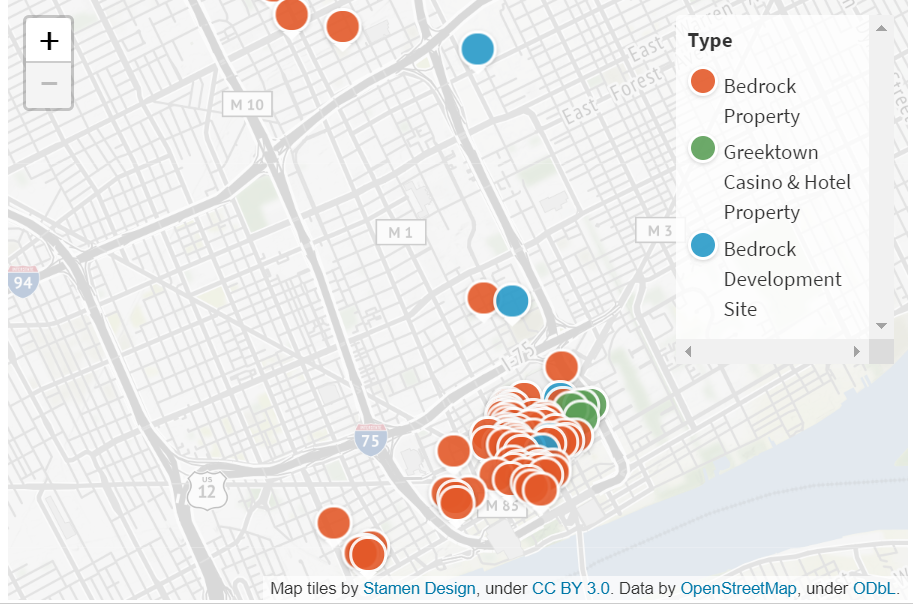 When I was growing up (well, okay, I’m still in that process), my grandmother always had words of wisdom, even if that wisdom was not always of the warm and fuzzy variety. But one warmish thing I recall her saying in times of turmoil and bad happenings was, “Things will change lickety split, don’t worry.”

It was quite a few years before I realized lickety split meant fast. That phrase came to mind today as I was researching Billionaire Dan Gilbert. We’ve blogged a bit about Quicken Loans (and Rocket Mortgage) and Jeff Bezos of Amazon. Today, we’ll focus some on Dan Gilbert, who happens to own Quicken. He is one lickety split kind of guy, in both good and bad ways.

On May 26, Dan Gilbert suffered a stroke. No, no, this is not an obituary (he survived). But I certainly believe that day changed his perspective, life, and goals--lickety split. What follows here is a compilation of some of the professional things Dan has done in his life (as I had NO idea) with a focus, of course, on his mortgage endeavors.

Dan Gilbert and company own over 100 buildings in Detroit, many of which have been totally renovated.

He owns many Detroit skyscrapers — the First National, One Woodward, 1001 Woodward, and others where about 17,000 workers are employed.

Then there is Rocket Fiber, which works at providing Detroit’s fastest home and business internet service, and StockX, allegedly the first online consumer "stock market of things" for high-demand products like expensive sneakers. Yes, it is a lickety split company.

Quicken originally started in 1985 as Rock Financial, co-founded by Gilbert. It was then sold it to Intuit for $532 million in 1999, but bought it back 3 years later for $64 million.

He currently owns the Cleveland Cavaliers.

Gilbert maintains gambling interests via ownership of Horseshoe Casino in Baltimore, Jack Cincinnati Casino, and Jack Cleveland Casino, and others.

Dan Gilbert was born Jan. 17, 1962, in Detroit, married Jennifer Gilbert, and has four sons and one daughter. In the category of NOT fun, Gilbert's son Nick has a rare genetic disorder called neurofibromatosis, which causes tumors to grow throughout his body. Dan and Jennifer Gilbert founded the Gilbert Family Foundation to help fight for a cure.

Possibly also not fun for Dan, is this article in Cavalier’s Nation, “NBA Commissioner Comments on Dan Gilbert’s Condition and Ability to Continue as Cavs Owner.”

Lickety split, let’s get back to the fun stuff. Here’s a map of just his Detroit holdings from the Detroit Metro Times.

And there is a colorful list of even more of what he owns, in detail, in The Rock Family of Companies.

In short, Quicken Loans Inc. is the nation’s largest online retail mortgage lender and the first or second largest retail mortgage lender. That depends on the ranking company, how badly Wells has gotten slammed in the media lately, and whether or not Quicken’s  volume is combined with Rocket Mortgage.

Nearly half a trillion dollars of mortgage volume across all 50 states from 2013 through 2018 was closed by Quicken.

It has also made the list of the “100 Best Companies to Work For” for the past 15 years.

Also from the link above, “The company was also named the #1 place to work in technology in 2017 by Computerworld magazine’s “100 Best Places to Work in IT,” a recognition it has received 8 times in the past 12 years. In addition, Essence Magazine named Quicken Loans “#1 Place to Work in the Country for African Americans.”

Most remarkable (to me), is that Quicken was, as stated, founded in 1985 and it still exists. Truly, not many other top lenders can make that statement. I’ve been with 3 top 10 lenders which no longer exist. 2007 and 2008 happened and, lickety split, we said goodbye to so many mortgage companies, but not Quicken.

Of course, Life in the Fast Lane, is never perfect. Just a month before his stroke, the Detroit Free Press reported, “Dan Gilbert defends Quicken Loans over 'junk' bond rating.”

Let's digress a tad. What IS a junk bond? See a great video explanation from our friends at Investopedia (scroll down after clicking). I also liked these two included classifications of junk bonds.

And then the summary:

“Despite their name, junk bonds can be valuable investments for informed investors, but their potential high returns come with the potential for high risk.”

To all numerical evaluations, Dan Gilbert’s empire looks very little like “junk.” But what of Dan Gilbert himself? Numerous accounts say his road to physical recovery ”will take time.'' Here’s a quote from the Detroit News.

"He’s on the road to recovery," Quicken Loans CEO Jay Farner told CNBC's Jim Cramer on "Mad Money" on Wednesday. "If there’s a guy out there who has the passion and energy to accelerate whatever timelines they have for him, it’s Dan."

Asked for an update, Quicken Loans referred to a statement released more than a week ago in which Farner said he "maintains his strong sense of humor and focus on constant improvement" and that his "recovery is a process that will take time."

That sure sounds like a lickety split recovery is in process. It also highlighted Dan’s sense of humor. Ironically, Dan Gilbert himself is a lover of practical jokes, even though he may not be that great at them. The big lead printed,

“A lover of practical jokes, Gilbert once wanted to dummy up a fake news release that the Cavs were signing Dennis Rodman to a 10-day contract and put it out on April Fools’ Day; he was talked out of that one. After a playoff victory over the Washington Wizards 10 years ago, Gilbert had a remote-controlled fart machine installed under coach Mike Brown’s seat. When Brown went up to the dais for the postgame news conference, Gilbert stood in the back and worked the controls. Brown was flummoxed — although the microphones didn’t pick up the sounds.”

Okay, lets see if we can produce some better humor lickety split. Exercising that has been sorely lacking so far in this blog.

And from Active Rain: