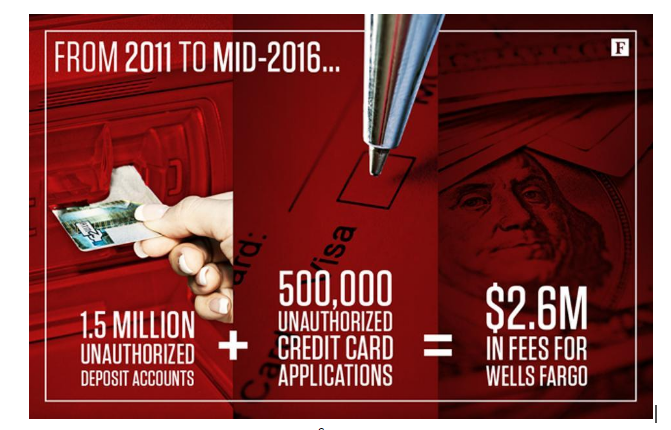 I have a friend who is a conspiracy theorist. He told me a few months ago to watch for the “feds” to attempt to bring down a “big bank”. He had various explanations for this – the world order exerting its authority, something to do with the upcoming presidential election, etc. It was, therefore, ironic (maybe even spooky?) when the Wells debacle materialized.  No, I am NOT saying this was part of a giant conspiracy. I am just saying it has coincidentally been a bad month for Wells Fargo.

But that sort of internet shaming pales in comparison to the lambasting Wells CEO John Stumpf took from Congress a few weeks ago. See this excerpt on Fortune, “Congress Hammers Wells Fargo CEO”. Wowza

The answer to that question is now – so many, many things. But let’s start with the massive trigger event.

Even if you are not a financial news junky, it was hard to miss this one, “5,300 Wells Fargo employees fired over 2 million phony accounts”.  The CNN Money subheading was even more scorching, “Everyone hates paying bank fees. But imagine paying fees on a ghost account you didn't even sign up for.”

According to CNNMoney.com, “The way it worked was that employees moved funds from customers' existing accounts into newly-created ones without their knowledge or consent, regulators say. The CFPB described this practice as "widespread." Customers were being charged for insufficient funds or overdraft fees -- because there wasn't enough money in their original accounts.

Additionally, Wells Fargo employees also submitted applications for 565,443 credit card accounts without their customers' knowledge or consent. Roughly 14,000 of those accounts incurred over $400,000 in fees, including annual fees, interest charges and overdraft-protection fees.

The CFPB said Wells Fargo will pay "full restitutions to all victims." Regardless, the CFPB also levied a $185 million fine levied against the firm. It seems like Wells just cannot do well lately.

Who is to Blame?

If you ask Congress, that blame falls on CEO John Stumpf. It was announced on October 12 that Mr. Stumpf would retire. NBC News reported, “Wells Fargo said on Wednesday that Chairman and CEO John Stumpf is retiring as chairman and CEO of the bank, effective immediately. The stock was last up more than 1 percent in extended trading.”

When he testified in front of the Senate Banking Committee, he apologized but it wasn’t enough for the senators. “You should resign. You should be criminally investigated by the Department of Justice and Securities and Exchange Commission,” Senator Warren told Stumpf. Other senators pressed him on executive compensation and whether there should be clawbacks.

Enter Carrie Tolstedt: She ran the unit that was responsible for the millions of fake accounts. According to Forbes, “Tolstedt retired this past summer, but could still have millions of dollars in compensation clawed back. CEO Stumpf has declined to publicly comment on whether Tolstedt deserves this compensation — providing his critics with more reason want him gone.”

The Wall Street Journal reported, “Wells Fargo CEO Defends Bank Culture, Lays Blame With Bad Employees”. My Stumpf promised to, “… eliminate the practices at the center of the controversy: branch-level sales goals that encouraged employees to cross-sell products to customers … Many of the employees felt pressure to sell customers multiple products or services—for example, home-equity lines to certificate of deposit holders—to stay in their jobs or earn bonuses tied to sales goals, according to interviews with current and former Wells Fargo workers. Some branch employees met with their managers several times a day to report their progress on meeting cross-selling targets, they added.” And the dismissal of the 5300 hundred employees was not in one fell swoop.

“The 5,300 employees who were fired over five years due to improper selling, Mr. Stumpf said, included bankers, managers and bosses of those managers. Chief Financial Officer John Shrewsberry said about 10% of the employees let go were branch managers or higher.

Mr. Shrewsberry said the bank’s issues stemmed from “people trying to meet minimum goals to hang onto their job.”

Much of the activity occurred in Wells Fargo’s large community-banking division. That unit generated $12 billion in revenue in the second quarter and accounted for 57% of the overall bank’s net income during the quarter. On Tuesday, Mr. Shrewsberry said the bank is spending $50 million annually on addressing these issues.

“Cross-selling has been a religion there,” said David Hendler, founder and principal of bank research firm Viola Risk Advisors, LLC. “They can’t say we’re not going to do that and not have another idea to roll out in the meantime,” Mr. Hendler said.

Wells Fargo has sought to put the 5,300 figure in the context of its overall workforce of nearly 270,000 staff. But Mr. Stumpf acknowledged Tuesday that the number of dismissed employees was far higher than he wanted.

“The 1% that did it wrong, who we fired, terminated, in no way reflects our culture nor reflects the great work the other vast majority of the people do,” he said. “That’s a false narrative.”

Some employees who recently left were critical of the executives’ message. Mita Bhowmick, a former Wells Fargo teller in Pennsylvania, said of responsibility for the sales tactics, “It was all management: their boss, then their boss, then their boss.” Ms. Bhowmick took early retirement from the bank in 2014 at age 58. “They are putting pressure on employees, and it’s sad,” Ms. Bhowmick added. “People need their jobs.”

A public and political uproar followed the allegations that Wells Fargo employees had opened as many as two million accounts without customers’ knowledge and sometimes created fake email addresses on phantom applications.

According to Fortune, here is one huge effect. “Wells Fargo Is No Longer the Most Valuable Bank in the World”.  In September, “Fargo shares continued to fall in Wednesday trading, bringing its overall market value down to about $228 billion—more than a $9 billion loss in value. That lifted competitor JPMorgan Chase JPM 0.03% to the top spot with an approximate $10 billion market cap advantage over its rival. Fargo’s stock has plunged 7.75% since last Thursday.” That is one major and adverse ramification.

Very shortly after the scandal hit the news, California suspended all Wells dealings.  Details from The Atlantic:  “John Chiang, the [CA] state treasurer who oversees $2 trillion in bank transactions annually, announced the unprecedented sanctions Wednesday. In a letter to Wells Fargo, he asked, “How can I continue to entrust the public’s money to an organization which has shown such little regard for the legions of Californians who have placed their financial well-being in its care? … the specifics include: suspending investments by the Treasurer’s Office in all Wells Fargo securities, not using Wells Fargo as a broker-dealer for buying investments, and stopping to employ Wells Fargo as a managing underwriter on negotiated sales of California state bonds where the treasurer appoints the underwriter.”

At least one other state followed suit. According to the LA Times, “Illinois, following California, sanctions Wells Fargo over accounts scandal”. And this trend could continue.

The Wall Street Journal opined, “… analysts are now concerned that the bank’s customers will grow more suspicious of Wells Fargo’s motives and eventually move some of their deposits and lending business to rivals.”

And Wharton.com added, “Wharton professor of legal studies and business ethics Peter Conti-Brown traces the scandal at Wells Fargo to the practice of cross-selling in the financial services industry. In that model, banks try to enlist customers to buy more and more products from them, thereby saving on servicing and other costs, which add to profits. Michigan State University professor of economics and international relations Lisa Cook worries that such a profit model is common across the industry and that other banks, too, may be guilty of similar practices. Going forward, Brown suggests further action based on the regulators’ findings, while Cook expects many Wells Fargo customers to switch loyalties to credit unions or other banks they feel more secure with.”

Business Insider voiced a different opinion. “Digital disruption is partly to blame for the Wells Fargo scandal.” They point to the need for changed tactics necessary to accommodate millennials. “It makes sense that Wells Fargo is pushing its employees to enroll customers in as many services as possible, because more services mean more loyalty, less attrition, and higher lifetime value. For example, mobile banking users, who are among banks’ most engaged clients, consume one more product and have lower attrition rates than branch-only customers.

But the retail banking industry is extremely competitive right now, thanks to the proliferation of fintechs and other alternative service options, which means growth is challenging and makes extracting value from existing employees increasingly important, according to CNN Money.

More millennials are moving toward digital banking, and as a result, they're walking into their banks' traditional brick-and-mortar branches less often than ever before.

This generation accounts for the greatest share of the U.S. population at 26% and the employed population at 34%, so it's easy to see why their behaviors and preferences will have a profound effect on the future of the banking industry, particularly with regard to the way banks interact with their customers.

Third parties are expanding their role in providing services that consumers use to manage their money. And the more that role grows, the more it will disrupt the relationship between banks and their customers.”

Regardless, Wells Fargo has a trust issue and that translates to a money issue. One analyst, Richard Bove of Rafferty Capital Markets, downgraded Wells Fargo shares to “sell” from “hold,” dropping his target price on the stock to $44 from $51.

And this public scandal has created the expected mushroom cloud of anti-Wells activities. CNN Money reported, “Nathan Todd Davis said at a California State Assembly hearing on the Wells Fargo (WFC) fake account scandal that he filed 50 ethics complaints during his decade of working at Wells Fargo -- but nothing was ever done.

"I've been harassed, intimidated, written up and denied bathroom breaks," said Davis, who drove 350 miles from his home in Lodi, California, to speak at the hearing.

The former Wells Fargo worker directed his complaints to David Galasso, a senior Wells Fargo executive who was filling in at the hearing for CEO John Stumpf.”

I cannot determine exactly when Wells posted the graphic below on its main page. I could also determine no evidence of a global conspiracy against Wells. 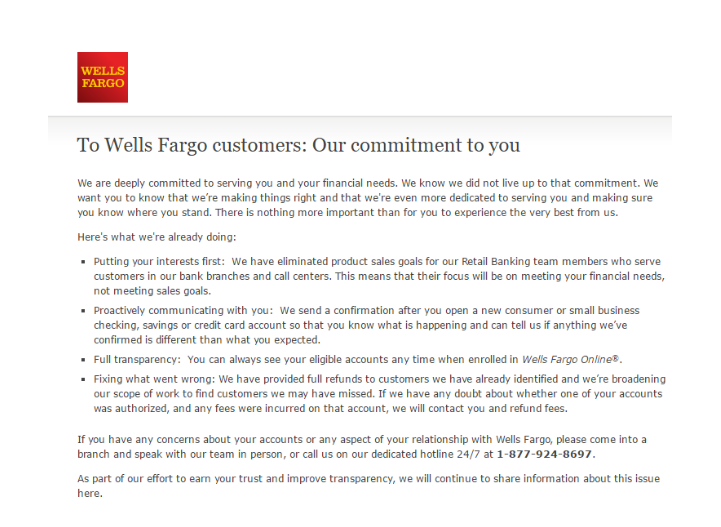