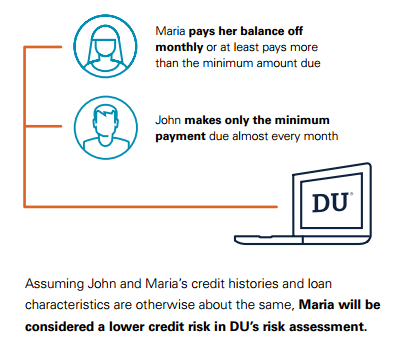 WHAT IS TRENDED CREDIT DATA?

Credit scoring is a way that lenders predict whether a consumer will pay on time. This has typically been accomplished by generating a FICO score. Read more on FICO from previous blogs (scroll down to credit here or #2 here). Fannie Mae has added some new rules to the old FICO game that is expected to eventually create a dramatic shift in the entire credit industry.

The new “Trended Data” (TCD -- Trended Credit Data – yes, of course we needed an acronym!) report goes into, well, different detail. The new report includes actual payment amounts and, among other things, up to 30 months of account history. Previously, credit reports indicated outstanding balances and notes on paying on time and paying off lines versus carrying a balance.

WHEN DID THIS NEW SCORING START?

Based on the fine print on the bottom of this piece from Equifax, trended data started, err, trending officially at least as early as 2014.

If you click the Equifax link above, you’ll see this ever-so-convincing quote from an esteemed yet anonymous industry leader from an unnamed company. [Sorry, this kind of cracked me up.]

“Trended data is the most important tool developed by the credit reporting agencies since the advent of the credit score.” Director of Card Risk, Large Regional Bank, Top 25 Retail Bank

It kind of made me wonder if said Top 25 Retail Bank still exists.

While it is not my intention to disparage Equifax at all, I have chosen to paste an exact excerpt from their piece here: That so reminded me of a game we used to play at large annual meetings. Every (interested in being a cynical, nasty) person who chose to play, got a list of buzzwords. The person who circled the most buzzwords mentioned in the shortest time during the meeting won a free drink later that evening.  Let’s play a similar game right now. How many buzz words can YOU circle in that pasting above? Your prize is a link to dictionary.com. See, you’ve already won -- just by reading this blog posting!

But I digress, as usual … let’s skip forward.

WHEN AGAIN – AND WHAT?

In October of 2015, Fannie Mae Announced Innovations for Lenders, Borrowers. One of these innovations involved Trended Data. Huh? Here is the explanation:

“Trended credit data – In mid-2016, Fannie Mae will require lenders to use trended credit data when underwriting single-family borrowers through Desktop Underwriter®. This data will be provided by Equifax and TransUnion, and allows a smarter, more thorough analysis of the borrower’s credit history. Currently, credit reports used in mortgage lending only indicate the outstanding balance and if a borrower has been on time or delinquent on existing credit accounts such as credit cards, mortgages or student loans.  With trended credit data, lenders will have access to the monthly payment amounts that a consumer has made on these accounts over time.  Among other benefits, this will allow lenders to determine if the borrower tends to pay off revolving credit lines such as credit cards each month, or if the borrower tends to carry a balance from month-to-month while making minimum or other payments.  Desktop Underwriter will be updated to utilize this trended credit data, and Fannie Mae will provide additional guidance to lenders in the coming months.”

This sounds much like FICO and credit scores and, yet, it is different. Here’s how the National Mortgage News explains it.

"If the borrower pays off their credit balance every month, that is obviously a stronger borrower and demonstrates an ability and willingness to make those payments," said Timothy Mayopoulos, Fannie Mae chief executive, during a recent earnings conference call with reporters.

Trended data separates borrowers into "transactors," who pay off their credit card balance every month, and "revolvers" who make minimum or partial payments and carry a significant or growing balance.

"The transactor with a middling credit score has a better chance of getting their loan approved than a revolver with the same credit score," Mills said. Overall, "trended data is supposed to be neutral or expand the credit box for potential borrowers according to Fannie Mae."

Craig Crabtree, senior vice president and general manager of Equifax Mortgage Services, said, "This is an exciting time for the industry. It is the first time that the credit report has been changed in 27 years."

Hold on a minute here.  Now, it is not just important for a borrower to pay bills on time, it is much better for them to pay them off each month? But isn’t the mortgage industry appalled by people who pay off their home loans too soon or before the “average length” of time they use to calculate the expected profit on the loan?  Hmm

In case that explanation of TCD is not clear, here it is, directly from Fannie Mae, in the 2016 semi-stick figure illustration: This past August, CoreLogic issued a four-page FAQ about Trended Credit Data.  HousingWire reported in rather pithy style, “Fannie Mae unexpectedly, indefinitely delays use of trended credit data”.  That mid-2016 date was wrought with technical glitches and other concerns. Therefore, it was delayed until ... Now.

Once all systems had been checked and stick figure drawings complete, TCD finally rolled out on September 24, 2016.  In the new words of Housing Wire, “It's official: Fannie Mae moves to open credit box with trended credit data”.

As you may know, loans that are slated for purchase by Fannie Mae are underwritten using their Desktop Underwriting system. That yields an approved/eligible result … or something else.  Since Trended Data is now incorporated, a Desktop Review Update is required. Here it is, directly from Fannie and including an exclamation mark -- DU Version 10.0 is Here!  which states,

“DU Version 10.0 will provide more certainty and simplicity to lenders while expanding access to credit and sustainable homeownership for creditworthy borrowers by providing enhanced credit risk assessment including the use of trended credit data, automated underwriting of loans for borrowers with no traditional credit, and automated underwriting for borrowers with multiple financed properties.

So, what does all of that mean? Per the last blog, again it’s all about the money.

Lenders lose (some) money when borrowers default on their loans. Trended Data will eliminate some of those borrowers via their predictive algorithm before they even close on a home loan. Lenders will, however, pay for their ops staff members to be trained on the new DU. See, for example, “Fannie Mae to Trigger 'Seismic Event' for Underwriting”.

And there’s more on the money aspect. Investopedia explains,

“There are many people who carry a credit card balance for a long time, paying mostly the minimum due, or slightly over the minimum, these borrowers will be viewed by lenders as higher risk than those who pay off their balances every month, or make monthly payments significantly larger than the monthly minimum. Also, people who conduct balance transfers between credit companies relatively frequently will also be viewed as higher risk borrowers to lenders. These borrowers can expect to get higher rates when they shop for a mortgage loan.  … The ability for lenders to qualify borrowers for mortgages based on trended credit data means that borrowers who continuously reduce their debts my making large payments or paying off debts every month will be able to get more favorable rates when shopping for a mortgage loan. Borrowers who carry a balance, tend to pay debt off slowly and make relatively small monthly payments will find it more difficult to get the low rates they have been accustomed to getting. Many of these borrowers consider themselves excellent candidates because they show a long payment history without defaulting on payments. However, lenders and secondary investors will increasingly see this behavior differently.”

Ah yes, higher rates, risk-based pricing, etc. may not apply to those who thought their good FICO scores guaranteed them the best possible rate. An acquaintance told me last week her mortgage application was denied. The reason given was “too many open credit lines”. The lender switched her to an FHA loan instead and she was approved at, yes, a higher rate on a loan that generates higher profitability. Disclaimer: I do not know anything about this person’s finances, payment history, assets, etc. But what little she told me does generate another hmmmm.

If this is indeed a Fannie Mae creation, you might assume, some lenders might be tempted, then, to sell loans to Freddie Mac, for example, instead of Fannie Mae. Well, no. In Jersey lingo (as well as some areas of Canada), “fugget about it”.

Have all credit bureaus switched to TCD? Not quite yet. Further, this new credit standard does not only pertain to mortgages. From creditcards.com, get ready for some new lingo!

“Research shows that information is an important predictor of risk. Revolvers are three times more likely to default on new credit cards and auto loans and five times more likely to default on current credit cards than transactors, a TransUnion study found. Partial payers -- those who actively pay down their balances -- are a lower risk than those who just make the minimum payment.” Using TCD, they may now be able to classify credit holders in one of these categories:

And all of this may be good or bad, especially depending on your perspective. Here’s one illustration of that from a separate creditcards.com piece.

“"I think it's a benefit to know there are consumers who pay off their balances, and who they are," said Linda Sherry, director of national priorities at Consumer Action. "It shows they're more responsible; or rich."

However, "if it leads to discrimination, it could have a downside." In the card world, discrimination could take the form of aiming high-fee cards at transaction-oriented users. Fees could help issuers make up for the transactors' lack of interest payments. "Some of the offers we get in the mail may be different," Sherry said.”

Admittedly, the use of FICO (click for a previous blog on this – see #2) has morphed over the years and actually is different for various purposes. Per myFico.com,

“FICO® Scores have been in use for over 25 years by many kinds of lenders to make more informed credit granting decisions. To keep up with behavioral trends of consumers and to suit the evolving needs of lenders, the FICO® Score model has been redeveloped over the years. The result is that there are multiple FICO® Score versions available in addition to the most widely used version, FICO® Score 8.” It appears that TCD will replace or at least change FICO scores. That has already happened in the auto industry. On 6/1/16, Yahoo! Finance reported,

“TransUnion and FICO announced today the availability of FICO® Auto Score 9 XT based on TransUnion CreditVision® trended data. The new score is specifically catered to the auto finance marketplace and includes several new features, including trended data from TransUnion's CreditVision.”

I played “Phone a Friend” and asked both an esteemed DE Underwriter and a top Loan Originator about the effects of TCD so far. Shockingly, their responses were similar in nature (and, trust me, that NEVER happens!). Both feel they have not yet observed much change. They said that only 2 of the 3 credit bureaus were using it so far and they believe that might be softening things – to date.

In summary, is the use of TCD a glaring illustration of George Orwell’s “Big Brother”?, or is it progress as it should be, or is it surely something that should have been rolled out prior to the mortgage crisis of 2007/08, or do you simply need more stick figure illustrations? What do YOU think?

How Long Until Others Follow in Fannie's Trended Data Footsteps?