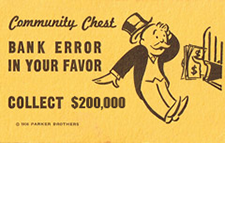 Have you been making your mortgage payments on time, even if your home value dropped and never rebounded? Stop reading now. This blog is N/A to you. What?? Let’s start by going back in time.

The FHFA has been seeking a way for underwater home owners to be given a real chance to keep their homes. On March 21, Joe Light of the Wall Street Journal tweeted that the FHFA may have found the way to do that – albeit for just a few of those in the same predicament. 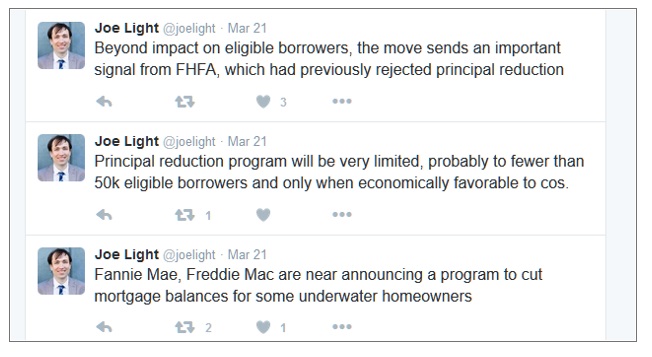 He gave more details in, “Fannie, Freddie to Cut Mortgage Balances for Thousands of Homeowners”. The following day,  Housing Wire reported a similar message. But specifics were still unknown.

Less than a month later, the facts are emerging. Both the NY Times and the Wall Street Journal reported some aspects of the program that Housing Wire compiled and explained. They noted, “In what it is calling a “final crisis-era modification program,” the FHFA announced Thursday that it will be launching a principal reduction program for some borrowers whose loans are owned or guaranteed by Fannie Mae or Freddie Mac.”

Watt also said that his objective for any principal reduction plan was to achieve a “win-win” situation for borrowers and the GSEs alike.

According to the FHFA, this program will give seriously delinquent, underwater borrowers their “last chance” to avoid foreclosure by providing principal reduction.

The principal reduction requirements and stipulations are different than the GSEs currently streamlined modification programs, the FHFA said.

Here’s how, courtesy of the FHFA, but get your acronym dictionary ready please:

“In existing Streamlined Modifications, servicers capitalize outstanding arrearages into the loan’s principal balance; set the loan’s interest rate to the current market rate; extend the loan’s term to 40 years; and, if a borrower has a MTMLTV ratio greater than 115%, forbear principal to 115% of the MTMLTV ratio or 30% of the unpaid principal balance (UPB), whichever is less. Principal forbearance defers payments on a portion of outstanding principal until the end of the loan and makes it non-interest-bearing. This reduces a borrower’s monthly payment but, unlike principal forgiveness, does not reduce a borrower’s overall indebtedness.

The FHFA further notes that there are “reasonable grounds” to expect that more borrowers will participate in the principal reduction program than in the streamlined modification program. This is because similar programs have never been offered; they expect much public interest will motivate eligible borrowers to participate; and support from “outside organizations” increases the likelihood of higher participation rates for the principal reduction modification compared to the streamlined modification.

Surely the program has numerous detractors. For example, Carrie Hunt, the general counsel of the National Association of Federal Credit Unions, stated in National Mortgage News, "It is extremely difficult to envision a scenario where principal reduction will do anything to strengthen the housing market," she said. "NAFCU strongly supports protecting consumers, but again, we believe that principal reduction sets a dangerous precedent."

When Watt took over as the official director of the FHFA in 2014, he started laying the ground work for a limited principal reduction program. After a congressional hearing the following year, he told Bloomberg, “I think it will be substantially narrower than the vision people have,” Watt told Bloomberg at the time. “Reducing everybody’s principal would cost taxpayers billions.”

Watt’s measured approach was not met well by Sen. Elizabeth Warren, D-Mass., who launched an offensive on Watt during a November 2014 hearing on Capitol Hill. “I’ve asked about this repeatedly and you’ve said you’d look into allowing Fannie and Freddie to engage in principal reduction; you said it again today,” Warren said at the time. “You’ve been in office for nearly a year now and you haven’t helped a single family, not even one, by agreeing to a principal reduction. So I want to know why this hasn’t been a priority for you. The data are there.”

By the end of 2015, over 4 million borrowers owed more than their homes were worth, according to CoreLogic data. Of course, regardless of the LTV, many of those home owners are still making their mortgage payments.

I had a high school friend who would force one of her parents to write her a “Please Excuse” note every time our school featured a paraplegic speaker who had been drinking and driving and, subsequently, severely injured. While the goal was, of course, to convince students to never do that, my friend was appalled that the school never invited a supremely successful young adult who never chose to drink and drive and who, as a result, attained lofty heights because s/he did not chose a different course.

For up to 33,000 Americans, either they have been offered a break or have had someone hit the “do over” button on their behalf. This mini magic wand solution should spread to other industries such as the beauty market. Imagine a pill, cream, or treatment that would remove those 15,000 hours of sun exposure and the subsequent facial wrinkles it produced, for example.

I am mostly joking and you would think I’d learn by now to exclude all editorial comments. In last month’s Blog, I had to go and mention Ocwen and the lousy service it provides. Not two weeks after publishing, you guessed it. I received yet another erroneous you-owe-us-too-many-thousands-of-dollars-for-your-incorrect-escrow account. Now I’ll have to spend untold hours attempting to resolve that.

So let me close by saying congratulations to and urging the 33,000 eligible borrowers to take advantage of this Watt and FHFA supplied ‘escape key’. You get another chance at paying off your home loan! If it doesn’t work out for you, perhaps Ocwen will refinance your home loan?